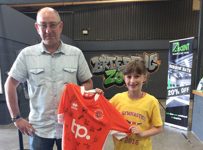 Summer 2016 was Ascent’s first ever summer, and what better way to celebrate than having two members of our hometown’s football team swing by for a bounce!

Blackpool FC’s Mark Cullen and Andy Taylor, delighted fans with autographs and pictures, even bringing along some official Blackpool FC merchandise ready for us to give away in our summer raffle which included a signed Blackpool FC t-shirt!